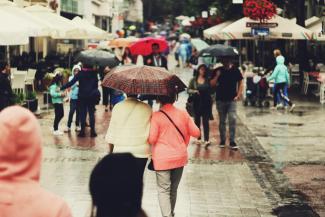 Growing up in Chicago, I was fascinated by the weather. I still am. Before I go boating, I study the skies, winds, and frontal movements. I want the boating experience for passengers to be pleasant.

Over time, weather computer models have become more “sophisticated” and help make weather predicting more reliable. True, but still not 100% accurate. Weather experts and models are often wrong in spite of all the data at their fingertips. Snow storms, tornadoes, paths of hurricanes, etc. are often miscalculated.

Much in the same way, Wall Street experts often miss the mark on their economic and financial predictions. The Federal Open Market Committee (FOMC), the organization made up of twelve members who vote on whether to raise, lower, or keep interest rate levels often reverse their projections.

Going into 2019, both Wall Street and FOMC predicted 3 rate hikes will be made before the year ends. Both, in writing and verbally, I joked at this asking what was in their coffee or tea. I did not see any inflation going into 2019. What was I missing? They have huge, highly paid staffs, complex computer models and a whole lot more data than the tools at my fingertips!

So, going into 2019, there was an inflation concern. Then, midyear, the experts did a 180 degree turn and predicted a possible recession.  Again, both verbally and in writing, I stated this was not on my radar screen. I said that our economy would not grow as robustly as it has been and expected it to slow a bit, but that there would be no recession in the near term.

Here is my point…

Certainly, we need sophisticated computers and software – they are valuable tools. However, we cannot ignore common sense. Also, we need to be very cognizant of what is actually happening on the streets in middle America. I’ve often said that perhaps it would be better if Wall Street, the White House, and Congress were actually based in America’s heartland.

I am not as sophisticated or smarter than the experts. I’ve learned to ask questions, keep my eyes open and connect dots. In client meetings, I learn what is happening at their jobs, saving and spending habits, debt balance changes, children coming back to live at home, and much more. These stories paint a picture of the real world and help explain the real state of our economy that might not be fully incorporated into huge, costly corporate models.

I shall never forget when the highly respected Alan Greenspan was Chairman of the FOMC. He raised interest rates citing inflation skeletons in the closet. In my numerous client meetings, a picture was forming that our economy was slowing, not heating up, so I wrote an open letter to Mr. Greenspan saying he was wrong and we have more of a potential problem of an economic slowdown based on what I was hearing from middle America.  Clients shared with me various facts concerning their jobs, firms, employment cut backs, and slower spending. Learning this information from clients employed in various industries painted a clear picture of an economic slowdown. So why in the world was Greenspan raising rates? Shortly thereafter Greenspan retired and Ben Bernanke became Chairman. He quickly and decisively reversed what Greenspan did and cut interest rates several times.

Brad is the Chief Investment Officer of SFG. Brad and I communicate often. He is a no-nonsense, talented professional whom I respect.  He accumulates significant information on financial conditions with his computers and sophisticated software programs. But he does not stop there. He then confers with the SFG advisors who are on the front lines meeting with clients. Together, the SFG team gathers updated information relating to each client’s personal situation, jobs, risk tolerance, financial goals, time horizon, cash flow, debt, and much more.  This wide-ranging package of vital information then is transformed into personalized strategies, providing enhanced value to clients.

Isn’t it refreshing to know that you have a financial team with significant experience and education on your side who not only studies computer models, but also incorporates common sense, main street knowledge into the equation?

“In the beginning was the Word and the Word was with God, and the Word was God….The Word became flesh and made dwelling among us…From the fullness of His grace we have all received one blessing after another.”

“Come, let us bow down in worship, let us kneel before the Lord our Maker; for He is our God and we are the people of His pasture, the flock under His care.”

“He will judge the world in righteousness and the peoples in His truth.”

“It is done. I am the Alpha and the Omega, the Beginning and the End….Behold, I am coming soon.”

A good name is better than fine perfume… Ecclesiates 7:1

Unless otherwise expressly indicated, the opinions or views expressed in this article are the author's own and do not reflect, and may differ from, the opinions or views of StrategIQ Financial Group, LLC or others within StrategIQ Financial Group, LLC, including its officers, managers, owners, employees or other service providers.