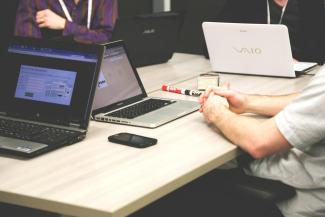 Let’s face it – some of us have a tendency to form attachments with every day, inanimate objects.  The favorite chair.  The lucky shirt.  That first car!  It is an oddity of human behavior, but for some people it really is a “thing;” and I must confess to having adopted this line of thinking myself at times.

Personally, the lure is two-fold:  Firstly, getting the most out of my purchases just makes good financial sense.  Secondly, it just seems wrong somehow to replace these items when they are there day in, day out, loyally performing their intended function.

Unlike a chair, shirt, or car however – the devices you use for online communications may not show obvious signs they are in need of replacement.  I have personally seen devices that are several years old – yet due to the owner’s meticulous care - could pass for new if I didn’t know better.   Unfortunately, there is more to consider when replacing these devices than the physical condition or performance.

An aspect we don’t always consider - the software that actually runs on the device (OS / Operating System / Firmware / etc.) - is typically supported by the manufacturer for a limited amount of time after the date of release, and once this period of time lapses, the device is declared “end of life.”

For some devices this may not be a big issue, the device continues to function as always.  For devices with sensitive information (such as smart phones, tablets, and computers) however, it is critical.  An “end of life” device will no longer receive product updates and security patches to address issues as they are discovered.  If you continue to use such a device, you are putting your personal data at risk.

These reports should serve as a stark warning against using a device that is end of life in any kind of a sensitive context.  For that rare user who never uses them in conjunction with personal or financial data, the risk is minimal.  If however, like most people, you find yourself increasingly reliant on technology; not upgrading conjures up the old adage of “penny wise –pound foolish” as the decision can wind up costing much, much, more in the long run.

There is always a “latest and greatest” out there; so I am not advocating that everyone rush out and become an early-adopter of new tech.  On the other hand - nothing lasts forever - especially when it comes to the ever-evolving world of data security.  Staying within the manufacturer’s window of support will play a large part in ensuring the integrity of your personal data.