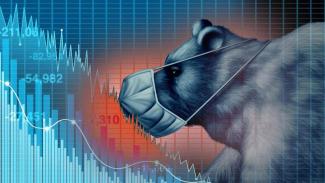 It happened on March 11: after 11 years, the S&P 500 once again entered a bear market. Defined as a decline of 20% or more from recent highs, this is the first bear market for the popular stock index since the 2008 financial crisis.

There's been a lot of talk recently comparing what's going on in the financial markets as a result of the COVID-19 outbreak to the 2008 financial crisis. While there have been some similarities, most notably daily bouts of extreme volatility and periods of unmitigated selloffs, the events that precipitated the current situation, the economic climate prior to the outbreak, and reasons for the selloff are wholly different.

Why this time is different

Although this is the first official bear market for the S&P 500 since the financial crisis, we came very close a little over a year ago. At the end of 2018, the S&P was down over 19% from recent highs, on the cusp of falling into a bear market. But instead of falling further, the S&P rebounded very quickly: following a loss of over 9% in December 2018, the S&P finished January 2019 up 8% and closed out the blockbuster year up nearly 30%.

We're now in what has become the fastest bear market in history. It took only 16 days for the S&P 500 to fall over 20% from the high on February 19. While the drop was fast and deep, with the possibility of getting deeper before it's over, the circumstances are much different than in 2008, and there's an argument that we'll be able to recover faster because of it.

Let's not lose sight of what sparked the 2008 financial crisis: a housing bubble fueled by incredibly risky (not to mention predatory) lending practices designed to be offset through highly leveraged financial instruments known as credit default swaps. As foreclosures mounted, the pressure on the financial system grew until the U.S. government was able to pull the economy back from the brink of collapse. Obviously, this is an abbreviated version of events, but the point is that in 2008, there was a bubble and a systemic failure.

Fast-forward to 2020 and we find ourselves in a much different—though still challenging—situation. China, the world's second-largest economy and biggest exporter of goods was effectively shut down due to the spread of the virus. This alone had a significant impact on the economy: global supply chains were disrupted and demand for goods and services slowed as people stayed home. But for reasons unknown, the financial markets didn't seem to be overly concerned about what was happening abroad.

As the virus began to spread to the U.S. concerns mounted about what social distancing, closures, and working from home would mean for our service-driven economy. When this outbreak finally passes, there will be some pent-up demand for goods, but for a service economy, there isn't always a way to recoup lost sales—you're not going to get two haircuts next month because you couldn't get one this month.

The spat over oil prices and production between Russia and Saudi Arabia was essentially the equivalent of pouring gasoline over a flame: the markets ignited with fresh worry over the economic outlook, triggering selloffs in both the stock and bond markets—which doesn't happen often—showing even patient investors that sometimes there's nowhere to hide during periods of heightened uncertainty.

The concern over what the spread of the coronavirus means for the global economy in the short-term is justified. When there are issues on both the supply and demand side of the equation, earnings and growth will suffer. However, it's important to recall the condition in which the U.S. entered this global crisis: unemployment was at historically low levels and though valuations were still high in the stock market, the economy was on rather solid ground.

The bear market was caused by the COVID-19 outbreak and not a systemic collapse of the financial system. This is a really important point to keep in mind as it's highly probable that whenever this passes, the economy will be able to recover rather quickly. There are signs that the government will make efforts to help ensure that hourly workers and those not able to work remotely will receive some sort of aid, which will help limit the extent of the downturn and help boost the speed of the recovery.

This is not to say that the world will go back to the way it was right before the outbreak. Companies may look to diversify their supply chain and move production away from China, which would impact profits, jobs, and growth.

The current interest rate environment will likely become a greater challenge as time goes on. On Sunday evening, the Federal Reserve cut the Federal Funds rate to zero in the second emergency rate cut in less than two weeks. It seems like only a matter of time until some of the yield curve goes negative. This would be uncharted territory in the United States. Negative-yielding debt is now prevalent across Asia and Europe, but it's never happened here.

Given the impact the coronavirus will have on the economy during the outbreak, it's more likely than not that the U.S. could enter a recession, which is defined as two or more consecutive quarters of negative GDP growth. That said, it's also possible that by the time we officially enter a recession, we're already coming out of it, as demand picks up and we go back to our normal habits.

Long-term investors need to keep in mind that they're not investing for the next six months or even six years—many investors have decades left in the stock market and your success will ride on the compounded gains over this whole period. Even though the stock market reacts to news in an instant—stocks are also valued on the expectations of future growth and earnings. For example, if a stock is trading at 15 times its expected earnings, then next year's earnings only represent 1/15 th of the stock's value. Harder times in the short-term will impact valuations, but you have to see the light at the end of the tunnel.

This highlights my last and perhaps most important message: not missing out on the market's recovery. The market can turn on a dime—something we've all lost a few of the past several weeks.

This article was written by Kristin McKenna from Forbes and was legally licensed by AdvisorStream through the NewsCred publisher network.

INVESTMENT ADVISORY SERVICES ARE OFFERED BY STRATEGIQ® FINANCIAL GROUP, LLC, AN INVESTMENT ADVISER REGISTERED WITH THE SECURITIES AND EXCHANGE COMMISSION.