US – China Phase One Deal Overview 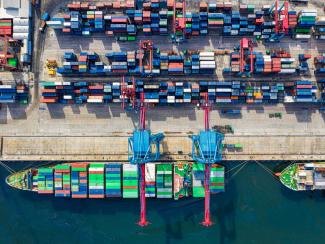 US – China Phase One Deal Overview

The trade war between the United States and China was the main driver of volatility for the market in 2019. After months of negotiations and drama, the two sides were finally able to agree to a “phase one” deal that is hopefully one part of a more comprehensive trade agreement. China has agreed to make greater purchases of U.S. goods and to undertake reforms in areas like financial services, currency, intellectual property and agriculture, among others. In return, the U.S. has agreed to reduce or cancel some tariffs.

In the past, it has been difficult for U.S. companies to do business within China’s financial service market. The deal helps create opportunities for U.S. financial institutions to do business in mainland China. Credit card companies will also have increased access to the Chinese market.

As part of the deal, China has agreed to not devalue its currency. The Trump administration labeled China a currency manipulator in 2019. Because of this agreement, the U.S. has dropped that label. In theory, when a country devalues their currency, they will increase their exports because their products become cheaper for others to buy.

China has agreed to increase criminal penalties for copyright theft. The U.S. hopes this is just one step in the right direction to improve protection of company’s intellectual property like patents. If China lives up to this promise, it should be a positive for many industries, including pharmaceuticals.

China has agreed to ramp up imports from the U.S. In 2017, China imported roughly $185 billion in goods and services from the U.S. U.S. exports to China are expected to increase to approximately $260 billion in 2020 and $310 billion in 2021. It is unclear what happens after the two years are up, but both countries claim they expect purchases to increase for at least 5 years. Dozens of measures that restrict imports on a number of U.S. agricultural products were removed by China. China has agreed to speed up its approval process for genetically modified crops. Many types of corn and soybeans from the U.S. have not been approved for sale in China yet because of this.

Many tariffs imposed on China are remaining in place, and, as a result, China is leaving some retaliatory tariffs in place, although the specific goods that it has agreed to purchase as part of this deal are excluded from such tariffs. President Trump says tariffs are paid by China and go right to the U.S. treasury. Historically, the consumer is the one that incurs the cost.

There is an escape clause in the deal. If issues come up and cannot be resolved, either side can withdraw from the agreement. The deal fails to resolve any of the issues the U.S. has about China’s use of subsidies and state-owned enterprises. This, along with cybersecurity, could be focal points in potential phase two negotiations.

The United States-Mexico-Canada Agreement, better known as the USMCA, is a trilateral free trade agreement between the three North American nations. The agreement is an update to the North American Free Trade Agreement (NAFTA). The USMCA is a wide-ranging agreement that will affect trade in many areas between the U.S., Mexico and Canada, however, the main updates center around agriculture, automobiles and intellectual property.

The USMCA is expected to increase U.S. agriculture exports by 1.1% annually. American dairy and chicken farmers will have greater access to the Canadian market. On top of this, Canada has removed restrictions on imports of some U.S. dairy products. Wheat farmers should also see additional benefits due to the deal. Canada has agreed to end discriminatory anti-competitive practices that affected American wheat producers in the Canadian market.

Under the new agreement, automakers are further incentivized to use parts made in North America for their cars. Automakers must use at least 75% parts made in North America by 2023 in order to not be subject to tariffs. Additionally, the deal requires automakers to manufacture 40% of their vehicles in factories where workers are paid at least $16/hour and forces Mexico to pass labor laws that better protect their workers. This should move some manufacturing of automobiles from Mexico to the U.S. and Canada. These provisions should be a positive for U.S. autoworkers, but will likely raise production costs for North American automakers. These additional costs could be passed onto consumers. Critics of the deal also say that it does not do enough to protect the environment and overall that the deal provides minimal gains over NAFTA.

Mexico and the U.S. ratified the deal in June of 2019 and January of 2020, respectively. Canada is expected to sign the deal in the near future. The agreement expires in 16 years unless renewed following reviews of the agreement every 6 years.

We see two main investment themes coming out of these two agreements: Agricultural and Finance. Both agreements seem like a win for farmers but a loss for consumer stocks, as input costs are likely to increase. Finance companies look to be a winner, as they start to gain access to 1.4 billion people in China.