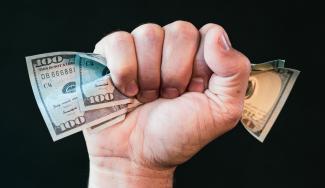 Why The Dollar Is So Strong

It is a good time to be an American tourist in Europe. Earlier this month, the euro briefly dipped below parity with the dollar for the first time in two decades. But there is no need for Americans to confine their travels to Europe. Almost everywhere in the world is cheap for them these days. This year the dollar is up by 15% against the yen, 10% against the pound and 5% against the yuan. Why?

In early 2021 the dollar was near its lowest level in more than five years against a broad basket of currencies. It had been battered by the uncertainties of the pandemic. As life got back to normal, a rebound was on the cards. But few analysts expected such a sharp rise. The greenback is up by nearly 20% against that basket of currencies compared with June last year. It has climbed to heights last scaled in 2002.

That is in large part because of the Federal Reserve's hawkish shift. Determined to rein in inflation, it has increased interest rates by 1.5 percentage points since March. Investors reckon it will raise rates by a further two points before the end of the year—the steepest pace of monetary tightening since the early 1980s. Interest rates are a crucial determinant of exchange rates: all else being equal, a country with higher rates ought to have a stronger currency because assets in that country generate a higher rate of return, hence attracting more capital inflows. This helps explain why the dollar has fared so well against the euro and the yen: the European Central Bank (ECB) and the Bank of Japan (BOJ) have been far more dovish. The ECB may start nudging rates higher this week, but the BOJ is holding firm with negative interest rates.

This contrast in policies reflects profound differences in economic fundamentals. For years Japan's problem has been deflation, with prices rising only slightly in recent months; its central bank is focused on spurring growth. In the euro zone inflation has run almost as high as in America. But its headache is more closely linked to the soaring cost of natural gas. Raising interest rates would not lower energy costs but would increase the chances of a recession. In America, excessive demand, stemming in part from fiscal and monetary stimulus during the pandemic, appears to have played a bigger role in pushing up inflation. Core inflation, which strips out volatile food and energy costs, was 5.9% year-on-year in America in June but just 3.7% in Europe. Tighter monetary policy (a way to curtail demand) is a more pressing priority in America.

All of this tightening by the Fed and other central banks is weighing on asset prices globally. Most stockmarkets are in rough shape, corporate bonds have been pummelled and the cryptosphere is in the dumps. Pessimistic forecasters think much worse lies ahead as recessions strike. This is, for now, all to the dollar's benefit. At times of financial turbulence, the greenback often benefits from safe-haven flows. Investors trust that, whatever happens, they can wait out the storm in America's well-regulated, highly
liquid money markets. A model by Standard Chartered, a bank, found that about 45% of the dollar's recent strength derives from its safe-haven status.

Will the rally last? If the Fed continues to outpace other central banks in its hawkishness, that would support the dollar's value. Likewise, a fresh round of market turmoil would probably bolster it. But having risen as far as it has, scope for further gains may be
limited.

© 2022 The Economist. All Rights Reserved